Gershwin’s opera Porgy and Bess is the first true American opera. It brilliantly combines Afro-American music, jazz and even Broadway songs with European opera tradition. It is rarely staged in our corner of the world, so the aim of the radio symphonists was to introduce at least the music to listeners and, thereby, spark their enthusiasm. Saturday night at the Rudolfinum showed that this approach was the right one. 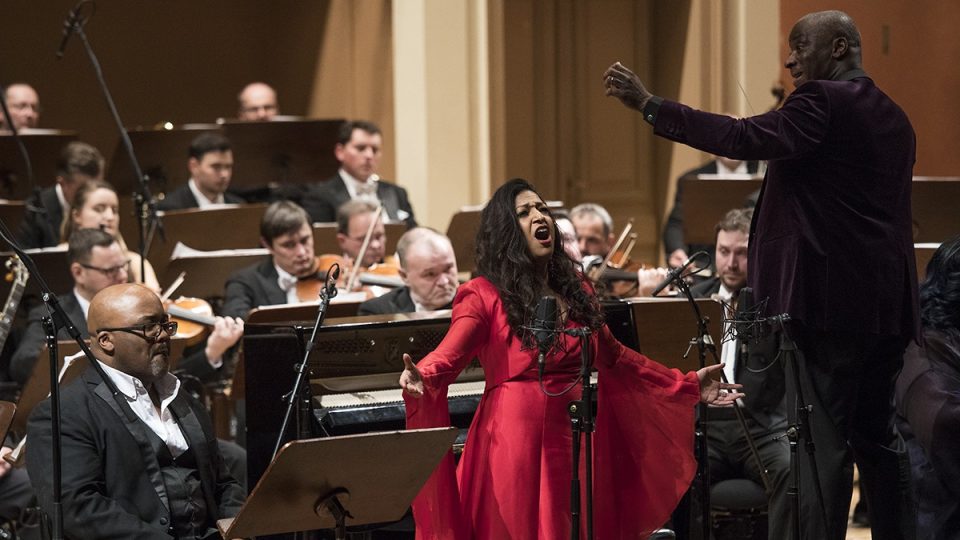 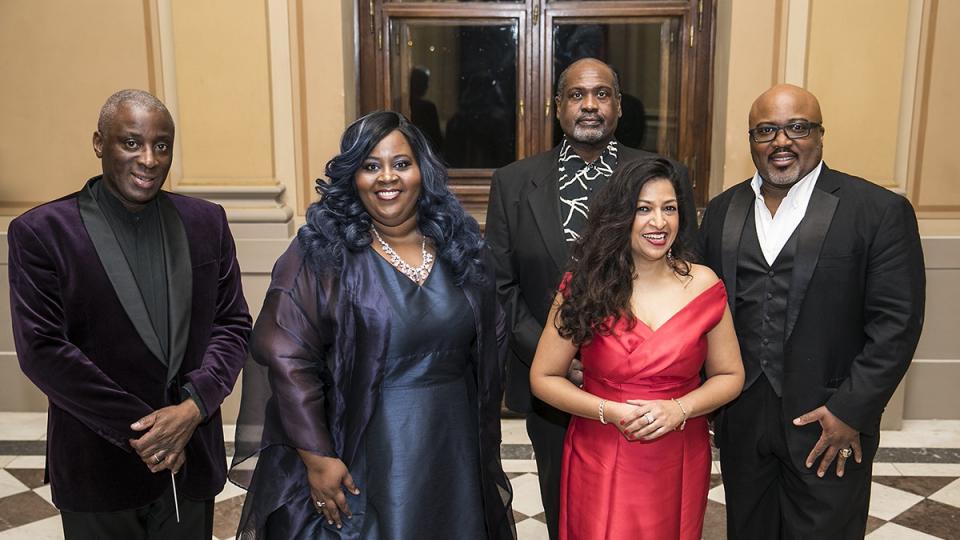 The project would be made or broken by the choice of director, so inviting Wayne Marshall was a stroke of genius. This British artist with Barbadian heritage and chief conductor of WDR Funkhausorchester Köln (the second, “lighter” orchestra of the West German radio station in Cologne) is a renowned interpreter of higher popular, musical and film music as well as modern American music. Gershwin infused all this in his only opera in an extraordinary way; this specialist was therefore exactly what was needed to bring out the uniqueness and authenticity of this work.

Marshall conducted and inspired the musicians in a special way. The Prague Radio Symphony Orchestra willingly transformed itself into a big band and the Prague Philharmonic Choir into an operatic body.  The feeling for rhythm and awareness of the required expression were exact and stylistic; the orchestra and the choir thus not only supported the soloists –their roles evidently being in their blood – but were also equal partners.

The conductor, who was masterful and confident throughout the evening, began the concert by playing the overture as a solo on an authentic sounding, out-of-tune piano erected under the conductor’s bridge. Only then did he stand up and raise his baton. During the two-hour performance, a selection of the highlights of the opera were heard. This means scenes, arias, songs and hits. It was always clear that this is a concert, but the soloists managed through their assured performances to create the illusion of dramatic situations so naturally that the audience believed they were in a theatre, as if in front of them the realistic, expressive story from the slums of South Carolina about Porgy and Bess’s love was actually taking place, a story that does not end happily but is nonetheless powerful and moving.

Gershwin’s adaptation of the Dorothy Heyward and DuBose Heyward’s novel and play premiered in 1935. It oscillates between genres: it is halfway between a musical and an opera; it sounds a bit like interwar musical entertainment, but even more like modern music theatre acquainted with both verismo and expressionism. At the same time, with staging reminiscent of classic opera, they work together to create the style of this first true American opera, a style that uses the cultural expression of the descendants of black slaves from the American South: songs and spirituals, dirges, chanting and street-calling etc. alongside blues, jazz and Gershwin’s songs, i.e., elements that appeared together in opera for the first time ever. Disabled beggar Porgy lives for a while with Bess and protects from her violent former boyfriend Crown, but in the end Porgy loses her to the worldly Sportin’ Life through drugs. Porgy sets off to look for her in his wheelchair…

American Ambassador Stephen King, under whose auspices the radio organised the concert, declared that the Prague concert could not have taken place at a more opportune time. In the USA, February is Black History Month, which aims to highlight the diversity of American culture and the contribution brought by the African diaspora.

Four American singers shared the solos. The title roles were sung by soprano Indira Mahajan (renowned for playing Bess across the United States as well as in Paris, Geneva, Naples, Rome, Munich, Dresden and Japan) and bass-baritone Kevin Short.

These roles are more operatic, stylised, and intended for classically and operatically trained voices. Both singers also perform Mozart, Verdi, Donizetti, Bizet and other classics the world over. Critics call Mahajan’s Bess beautiful and seductive but also defenceless and vulnerable; her voice is perceived as pleading, exciting and moving. The Prague concert confirms this description.

Kevin Short’s voice was smooth and graceful (I Got Plenty o´Nuttin and the duet with Bess, You Is My Woman Now). Some licence had to be given to the fact the soprano also sang the lullaby Summertime, which is sung by Clara in the opera, and could have been even more interesting if sung by a singer who plays the character, and that the baritone also sang the part of Crown.

The second duo comprised the dramatic soprano Angela Renée Simpson and tenor Ronald Samm – much less “operatic” and instead authentically Afro-American: she in various commentaries and greater singing moments; he as Sportin’ Life – seductive, mocking, integrating cries and laughter into his singing (especially the song It Ain’t Necessarily So).

Angela Renée Simpson is the famous Serena in many productions of Porgy and Bess the world over, first in Graz ten years ago with Nikolaus Harnoncourt. She also performs European classical music concerts. Her voice is truly remarkable.

Ronald Samm can be heard around the world as Florestan or Wojczeck, but also in Verdi’s Requiem or Britten’s War Requiem. In Prague, they provided an unforgettable glimpse into the atmosphere of a unique work that combines elements of jazz and classical in a visionary and unrepeatable way and that aptly stylises Black musical expression.

The Prague Philharmonic Choir sang in almost every number. Its Saturday performance can be considered not only highly professional, but almost incredible. The church service scenes (Oh, the Train is at the Station), commented events and group scenes (Oh, I Can´t Sit Down, It Take a Long Pull to Get There, and others) were performed with broad dynamics, full sound, perfect vocal coordination and certainty of expression – even with remarkable command over complicated rhythmic expression. The choir was an equal partner in the performance. Lukáš Vasilek did an excellent job preparing the ensemble.

A saxophone is not unheard of in a symphonic orchestra, but a banjo? The Prague Radio Symphony Orchestra played brilliantly from the initial xylophone solos, through all syncopations, glissandos, blues extensions and rhythmic percussions, to the last blurred big-band brass chord. The dynamic level was set high for the whole evening, so the soloists’ voices had a hard time reaching the balconies, but it gave Gershwin’s music cadence and vigour, expressive intransigence and force. A true concert event. Not only in the Prague Radio Symphony Orchestra’s season, but in all of Prague’s current season.